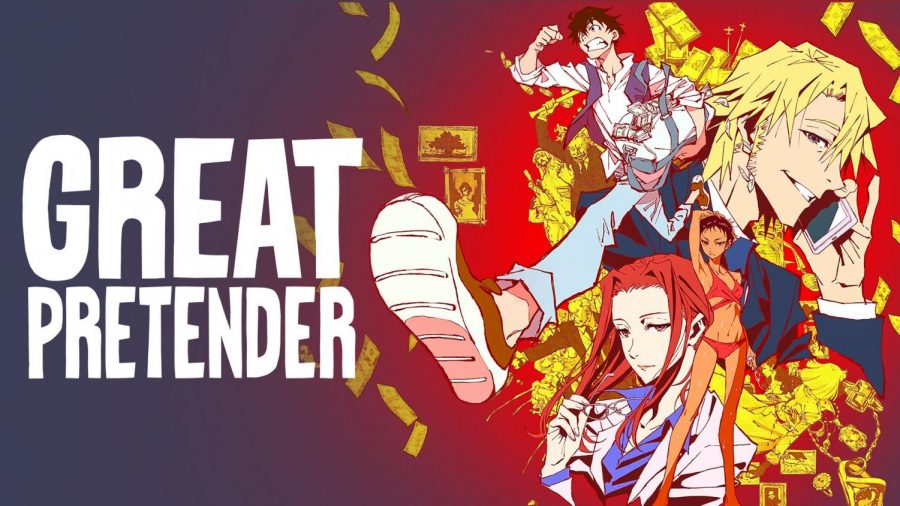 The Great Pretender debuted as a Netflix Original in Summer 2020 by Studio Wits, the same studio behind Attack on Titans and Vinland Saga. This crime comedy show has two seasons with the first having 14 episodes and the second having 9.

The story doesn’t have a strict overarching narrative, but more so are divided into heist cases in different parts of the world such as Los Angeles, Singapore, London, Tokyo, and Shanghai.

Our story begins in Japan with a young swindler, Makoto Edamura, trying to con a bigger conman, Laurent Thierry, who is one of the main characters of the show. Makoto and Laurent team up to take down a drug lord in L.A.

The Los Angeles Case is a nice introduction for the small cast of characters as well as setting up expectations for later heists in the show. It was well-paced enough to get a feel on most of the heist member’s roles that it had gripping tensions and fun twists especially towards the end of the Case. It sets a lot of small intricate details up and pays most of them off.

Makoto Edamura’s character is very likable and surprisingly charming under pressure despite his innocent look. However, his character suddenly became less focused and became more of an audience surrogate in the next two heists in just helping the heist and reacting to the plan since the team relies on him being oblivious most of the time.

The same cannot be said with Laurent with his experience as a real CONFIDENCE man and sly improvising at making things look like they are always according to plan even though it seems too convenient, it’s really entertaining to see him play and reveal his true plan at the end of each case.

Animations feel fluid and expressive in action or tense scenes. The art style isn’t particularly grim nor childish looking but flexibly appealing for all ages in comedic and dramatic scenes.

Each character has distinct personalities and appearances that bounce off of each other really well especially if they’re all in the same room bickering or planning. It doesn’t dwell too much into dialogues as it can be noticeably bad at certain points, but the visuals and/or action was just enough to distract me from it.

Singapore Case tones back the actions and pushes a bit more emotional narrative with one of the heist members, Abbie Jones, who is the brawn of the entire team.

Abbie’s story was sprinkled across the Case very sparsely that it kept me anticipating until it quietly ties itself up at the end. Abbie’s backstory is a hit or miss as her story is strictly shown with little explanation, but enough for you to piece together to get a sense of her.

Her story intertwined with the Singapore Air Race heist but doesn’t affect much which is okay as the Air Race heist is a very different scenario with a similar formula as the Los Angeles Case.

The London Case is different from the last two cases and is shorten to four episodes at a faster pace. It completely removes all actions and went heavily into the emotional narrative with the heist member, Cynthia Moore, who’s is the seductive con-woman of the team.

It has a couple of plot holes that were left unexplained in Cynthia’s backstory, but overall it intermingles very well with the London Auction Art heist. Unlike Abbie’s story, Cynthia is given more depth to her character since it actually is important to the overall heist to have the emotional tie in with another character to aid them. It still has the subtlety and unpredictability from the previous cases although not as frequent.

The antagonists of each of the cases are simple characters that are designed to be hated and despised by our protagonists. They’re a little bit far from a cartoon villain, but they still prove to be entertaining in their tone and approach.

The soundtrack in Great Pretender greatly fits different regions and the story moment with hip hop in LA to cool jazz in a quiet area. The opening in Great Pretender is inspired by Saul Bass’s art design and it’s visually charming to accompany the jazz. The ending outro is taken straight from Freddie Mercury’s song ‘The Great Pretender’ but replaced the visual with hand-drawn cats.

Overall, if you’re tired of seeing evil bigshot pulling strings immorally behind the scenes then Great Pretender is certain to entertain with many tricks and twist as well as conning them out. Despite the aesthetic being vibrant and appealing, it’s still not shy about showing darker topics and serious emotions in its narrative. It is best to watch Great Pretender unspoiled as it has plenty of twists and great surprises that really made me shout “What!” and anticipate what comes after.