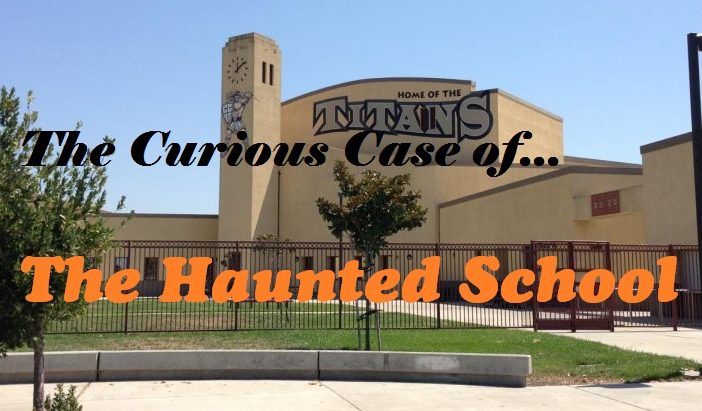 I recently had the pleasure of sitting down and talking to current Cesar Chavez High School custodian Juan Hernandez about some of the paranormal experiences he has had throughout his time at Chavez. From bangings on the walls and the smell of “pure marijuana” to encounters with Indians and wolves, some of these stories may shake you to your core just in time for the Halloween season.

The first story I was given was about some of the things Juan had specifically heard and smelled while in Mr. Gruno’s old classroom in D building; room D222. Gruno had initially asked him about experiencing anything strange while in his classroom, but Juan hadn’t, until one night when he was cleaning and heard knocking on the walls. He instinctively checked the next classroom over to see if anyone was there, but there was nobody. After going back to the class, he once again heard the knocking, but this time he knocked back and it stopped. Juan tried to think of any other reason for the knocking and initially thought that it could have been old pipes, but that’s when he came to the realization that there was no hot water on at the time. Following this incident, there was a problem in Gruno’s room where there was a constant smell of marijuana coming from the A/C vents of the room. Assuming that there may have been someone on the roof smoking, Juan went up there to check if there was any evidence, but there was absolutely nothing. The smell only seemed to linger within Gruno’s room and wasn’t anywhere else in the area.

A couple of years later, while Juan was working at the Kennedy Games, he encountered an older Native American man. After talking with him briefly, the man asked if he ever heard anything at night time, to which Juan responded by explaining his previous experiences. The Native American man then expressed that the land this school was built on may have been sacred and while he drove towards the school he felt some sort of energy and that was what drew him to the campus, not the Kennedy Games. As they wandered around the campus on a golf cart together the Native American suddenly said, “Stop!” and pointed towards the D building. He then said he believed that that building was specifically built on sacred ground. After hearing this information, Juan told the man about the knocking and the smell of marijuana. He then explained that the knock, “Was a knock of generosity.” and the smell of marijuana was caused by an incense Native American warrior used to smoke. Could this mean that Chavez really was built on a Native American burial ground?

Another story Juan had that genuinely gave me goosebumps was one he had from the auditorium late at night while he was cleaning. As most students know, the auditorium is very dark when the lights aren’t on naturally, Juan used the flashlight on his phone in order to see where he was going. (The following quotes were taken directly from Juan as he walked me through this experience)

“I was going through there, I had my flashlight on my phone out, and I’m just looking to see where I’m walking. Now I know there’s nobody in there and I have never heard or seen anything, I never felt like there was somebody watching me, but I heard a growl. And when I pointed my flashlight… it was this wolf.”

Upon making this discovery, it instantly terrified Juan as he initially didn’t know what it was because all he saw were the eyes. The wolf may have startled him at first, but midway through the experience, Juan noticed that the wolf was walking around, almost as if it was patrolling. After the wolf proceeded to walk around the entire auditorium, it looked back at him and left out the back door and when Juan went to go see where it went, it was gone, as if it had disappeared once it left the building.

Juan continues by telling me about his time in the military, and how during his 9 months stationed in Guam, he had a Native American friend who was going through the process of becoming a  “warrior” just as those in his family had done. He explained to me that this would be considered the equivalent of being a warrior in modern times as they teach you how to kill in the marines. While his friend may have been a massive, mean-looking kind of guy, he was actually very peaceful and is described as almost being one with nature. A quote that stood out to me personally from this story was, “Respect the jungle, and the jungle will respect you.”  This very much comes into play as Juan tells me about a time when they were in the middle of a jungle and he was advised not to urinate on a tree and instead dig a hole and bury it. After doing this, Juan and his Native American friend were the only two people out of their squadron who stayed dry throughout their entire time in that jungle where it seemed to have been raining in just about every direction. Following their training, Juan expressed that he was going to miss him as it was very much a learning experience for him and his friend responded by saying, “I will always be with you. My spirit will always be with you.” Juan then explained to me that his friend’s spirit animal was none other than a wolf. So is it possible that Juan’s old marine buddy was there in the form of that wolf to fend off some kind of evil spirits that night?

The last story Juan had for me wasn’t necessarily one he encountered firsthand, rather than more of a speculation. As I am sure most students know, especially the drama kids, there is a particular ghost that has been known to lurk in the theater and has been given the name Steve. I wasn’t given a whole lot of information regarding Steve until this interview with Juan who believes that his name may have actually been Mike Lewis, a former supervisor of Chavez about 13 years ago when the school first opened up. He was the main person to go to for anything that was needed on campus. He worked here until sadly, he passed away about 7-8 years ago.  However, apparently, the theater was where he spent a lot of his time just making sure it was in good condition as it was his, “…baby of the school.” Is this ghost that so many people have encountered really the ghost of Mike Lewis?

With all of these occurrences happening in the same general area, you really do have to wonder if Chavez really is built on some kind of sacred burial ground. The question that remains with all of this is, did any of it really happen? Well, that’s up to you to decide for yourself what you believe, but I can personally say that it’s pretty hard to discredit any of the stories and encounters I was given during this interview.