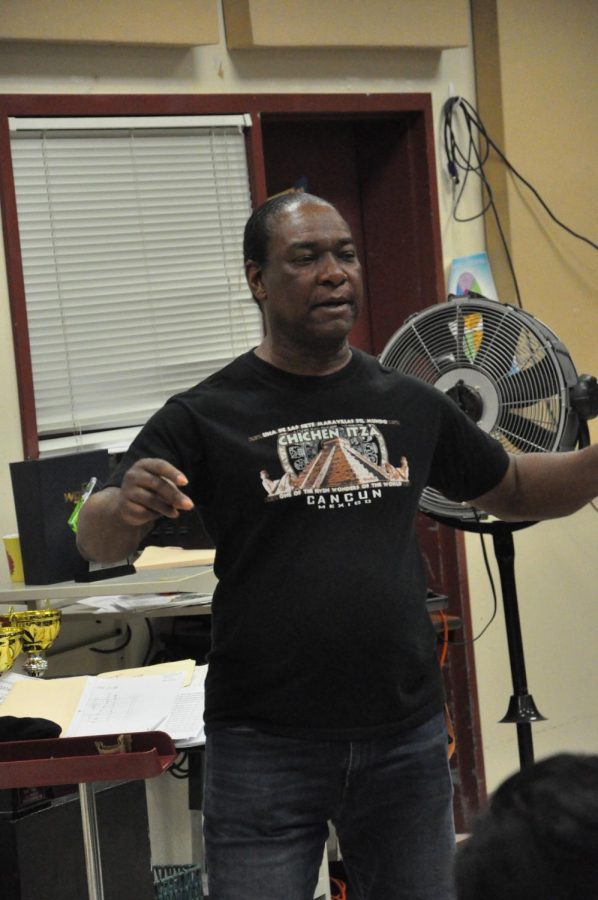 All Cesar Chavez High School students and alumni know the music teacher Mr.Coleman. Marcos and I followed him over the course of a week to observe all the great things he does and why he is so liked above most on campus. Mr.Coleman is not just a teacher, but a life coach as well. He has taught and coached at Cesar Chavez High School since 2005, when the school first opened. Since then he has been here from the start allowing him to be one of the two collaborators on the school’s Alma Mater with Mr. Sugitan.

Mr.Coleman doesn’t just teach his students to play instruments for fun, he teaches them to play their instruments to be in performances for the school, at games, for competitions, and they have also performed at Disneyland. The students that he teaches in second period have been so influenced by Mr.Coleman that they are now able to teach his fourth period class in order to help their skills improve. This has allowed those advanced students to become leaders and take over the second period class when they are ready. The second period students are so talented that they can play college level songs, most with ease.

We discussed Mr. Coleman’s longevity and how long he has been teaching for. His response was “I’ve been teaching long enough that I could have taught your parents.” Over the years he has learned to play all of the instruments, every single one of them. Although he knows how to play all of the instruments, playing the piano is still his favorite. The hardest instrument for him to learn was the violin. It was hard, but he still pushed himself to learn how to play it.

His overall goal is to make sure that programs stay the same way that they start and that they don’t die out and end up discontinuing the program. One way Mr. Coleman has contributed to his goal is by bringing back former students he has taught. For example, he brought in Luis Talamantes, also known to Chavez students as, “Tito,” the guitar and mariachi teacher for Cesar Chavez High School. After interviewing Mr.Coleman for six days we observed that Mr.Coleman can hear the small mistakes that his students make regardless of all the noise that is going on around him. For example, one day they were practicing and he stopped the whole class on the second try of it. He then made one section play and tweaked it until it sounded great. The amount of trophies that they have are countless. We took the time to count all of them and we failed, multiple times, but we do know for sure it is over a hundred trophies and still counting. CCHS thanks you Mr. Coleman for you tireless effort and support.