These are the skins that are in the Chapter 2 Season 4 battle pass.

Fortnite Chapter 2 Season 4 has arrived, and iOS players are still not able to play Chapter 2 Season 4. Fortnite on iOS devices got stuck in Season 3 Chapter 2 and cannot update until Epic Games removes the “epic direct payment” method. This is also likely to be the last season before the next generation console’s arrive. This season is the first season in 2020 to not be postponed. Last

season was delayed twice until the wet and wild flooded map was eventually unveiled. Fortnite Chapter 2 Season 4 and this season’s battle pass is all focused around Marvel superheros and the Nexus war. 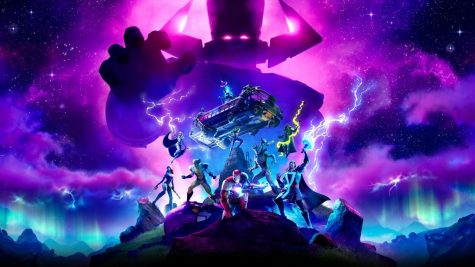 There are new locations and weapons, all focused around a story-line that will see heroes arrive on the Fortnite island to fight off the impending doom of Galactus’ arrival. The spawn island before getting onto the Fortnite battle bus is now the SHIELD Helicarrier. There are also a bunch of new locations for example Pleasant Park is now Doom’s Domain. At Doom’s Domain you will find the boss Doctor Doom and if you kill him you will get his gauntlets. Along with this update a lot of guns got unvaulted and vaulted. These are the weapons that were unvaulted this season and some of the new weapons: Pump Shotgun, LMG, Boogie Bomb, Revolver, Tac SMG, Scoped Ar, Shockwave Grenade, Bounce Pad, Port-a-Fort and Dr Doom’s Mystical bomb. These are the weapons that got vaulted this season: Tactical Shotgun, Pistol, Rapid Fire SMG, Submachine Gun, Hunting Rifle, Flare Gun, Launch Pad, Stink Bomb, and Decoy.