“I Disagree” by Poppy (Album Review) 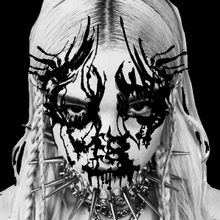 We’re only about a month into 2020 and we already have one of the strangest yet intriguing albums we will probably get all year in the form of I Disagree by American singer, songwriter Poppy. Following the release of her 2019 EP Choke, which saw Poppy (former YouTube sensation) go into a direction that nobody could have predicted, we have ourselves one of the weirdest blendings of genres as this album can only be identified as a mix between pop and heavy metal. Poppy truly breaks down genre barriers with this release as I Disagree is meant to celebrate her rebirth as a pop-metal artist.

It’s pretty hard to put your finger on what this album is exactly as it really is all over the place at times and creates some inconsistencies which end up somewhat hurting the album as a whole. These inconsistencies come in the form of thinking the album is going one way then taking a complete 180 and somewhat starting right back where we just were. While there are more than a few instances where this happens, there are also plenty where the inconsistencies work in the favor of Poppy on tracks like Concrete and Bite Your Teeth.

The lead single and opening track for this album, Concrete, has quickly become a personal favorite of mine as it takes on some pretty dark lyrics while keeping somewhat of a positive tone throughout, except of course for the heavy instrumentals between each verse. This isn’t the first time Poppy has taken a child-like persona and crossed it with heavy, dark lyrics and I doubt it will be the last.

The second single and title track I Disagree is a rather slower, but just as heavy song and is one of the more consistent songs as it carries a fairly balanced sound and tone all the way through. The lead up to the release of this track saw Poppy start to move away from her robotic persona with some even theorizing that this could just be her taking on a more advanced/humanlike robotic persona. The term “I disagree” has also sparked many theories that it is meant to refer to the fear that one day, our advanced intelligence devices will disagree with us and will go against what they are meant to do.

BLOODMONEY was one of the last songs recorded for this album and is one that is sure to give some people goosebumps as it deals with the hypocrisy and lies Poppy has dealt with throughout her time as an artist and she has no problem letting the world know exactly how she feels. There is very little subtlety on this track as Poppy also refers to her misunderstandings with religion and Christianity.

The next track, Anything Like Me, is one of the more inconsistent tracks as it starts out very slow and methodical but wastes no time picking up the pace. This would have been great had it kept the same energy all the way through but during the bridge it takes us back to the intro which was a little to slow for my taste. While I can say I didn’t like that portion of the song, Poppy comes back harder than ever following the bridge.

Fill the Crown, starts out sounding like a straight up pop song but once it gets to the verses it transitions into somewhat of an old school heavy metal type of feeling. Poppy has later stated that her inspiration for this track are the likes of Marilyn Manson and Rammstein, as well as Madonna.

Next is Nothing I Need which is definitely a least favorite of mine as it really plays it safe and is almost too poppy and mellow for me. It almost feels more like an interlude that was extended a bit and drags the overall energy of the album down a path it didn’t need to go.

Sit/Stay gets us right back on track with its’ opening beat and while this track does linger more in the pop side of things, it actually manages to execute it well, unlike the previous song. This track directly addresses the struggles that music artists go through with being controlled both creatively and with their actions by the music industry. The chorus even seems to be a message to oppressed artists saying that they shouldn’t just let themselves be manipulated and to stand up for themselves.

We get back on the heavy metal train with Bite Your Own Teeth as we are immediately met with some chugging guitar riffs as well as the fairly intense chorus that later in the song really picks up. The meaning of this song is supposedly referring to the impossibility of defining yourself as a person and comparing it literally biting your own teeth, which also is another impossible act.

Sick of the Sun takes us right back to the mellow pop sounding version of Poppy, which while it is fairly annoying to be going back and forth between the two sounds, I can appreciate this song for what it is. We take a journey with Poppy as she explores her mental state and feeling of isolation with the sound of a rather soothing guitar.

The final track on this album, Don’t Go Outside, begins with themes of apocalypse and isolation from the outside world which serves as somewhat of a continuation of the previous track. The bridge of this song features some much needed guitar riffs that really help send us to the final stretch of not just this song but the album as a whole. In the outro there are several callbacks to previous songs on this album which wraps up this project very nicely.

Overall, this was a rather interesting experience and after more than a couple listens, I’m still not entirely sure what to make of it. I thoroughly enjoyed the blending of pop and metal but if there is one negative thing I have to say about it, it’s that I feel it could’ve flowed differently and transitioned between the different genres better. While this is the first time Poppy has put out a full length record with such an odd sound, I am sure it won’t be the last and I look forward to seeing what comes next.

Least Favorite Tracks: Nothing I Need, Anything Like Me