My Top 10 Horror Movies of All Time 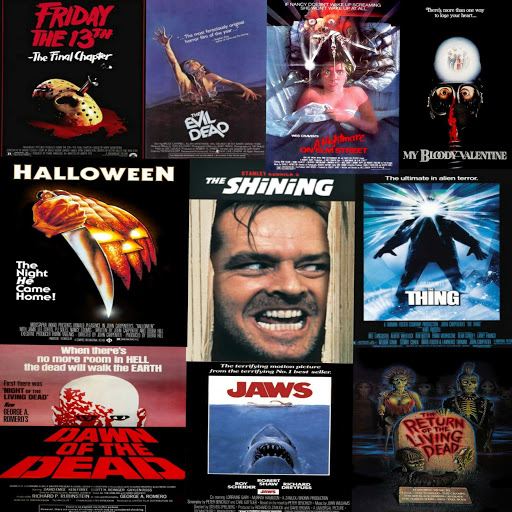 Horror Movies are always fun to watch with friends or family. They give a quick thrill during anytime of the year, especially around Halloween time. Horror Films are Movies that look to extract fear from the viewers that watch these films, unless you’re like me and watch these things for fun.  Most people watch these movies while giving out candy during Halloween or just during Halloween season, but in my opinion I think it would be fun to catch a thrill anytime of year. I am going to give you my top 10 list of horror movies that I think are the scariest, so grab some snacks, a blanket, and possibly some form of protection because you’re probably going to be paranoid and scared at some point of this binge watching of scary movies.

#1- The Exorcist: The Exorcist is a film that came out in 1973 about a little girl named Regan MacNeil A.k.a Linda Blair who has to keep herself occupied, but unfortunately does so by playing with the Ouija Board and talking to “Captain Howdy.” Over time her Mom and friends call this ‘Captain Howdy’ her imaginary friend. She starts acting really bizarre, stealing , cussing, and even unusual amounts of strength. Then when it is beyond strange and scary, Regan starts acting even weirder. She begins speaking backwards, speaking in tongue, and even has help me spelled out in scars across her body. Later, the mom calls two priests because she finally realizes her daughter is possessed.

#2-Texas Chainsaw Massacre: A group of Five hippie friends are on a road trip through the back roads of Texas , and come across a old beat up sinister looking house. But what none of them realize that they are facing the house of the most scary looking human( Leather face), and his twisted family of cannibals. One at a time throughout the move all the friends are being murdered in  the most twisted and horrifying ways. Later one girl finds herself waking up at their family dinner, she then flees into the dark fields in hopes of escaping the crazy family. This movie is based on a true story.

#3-Poltergeist: While living in an average house in a nice little suburban neighborhood, their youngest daughter, Carol Anne has been connecting to a supernatural ghost through a dead TV channel with just static on the screen,  weird occurrences start happening, at first they think its a little nice spirit. But what they don’t know is this ghost will eventually take a nasty turn and really start to horrify this family to death with every little thing that surrounds the poor family such as angry trees, murderous dolls, and finally by kidnapping  their innocent little daughter into her bedroom closet.

#4-Halloween 20 Years Later(H20): On Halloween in 1963 a little boy named Michael Myers murdered his sister Judith. In 1978 Michael broke out to kill his other sister, Laurie strode. When he broke out he tracked her down and killed all her friends but she managed to escape. Later on she fakes her death and changes her name and moves to California to hopefully escape from her brother. He finds some papers and uses those to track his sister down where he finds her and eventually finds her at the private school where she teaches at. Throughout the rest of the movie she finally decides to do what she should’ve done a long tie ago and face her brother off once and for all with the risk of him killing her son.

#5-Candyman: A woman that is a student visits a part of town to learn about the legend “Candyman” a one armed man who appears when you say his name five times on front of a mirror. The student doesn’t believe it so, she decides to ignore all the signs and begins to search the ares where the people say he appears, and a series of horrible murders begin.

#6-Evil Dead: Five students decide to go have a fun time in a remote cabin where nobody knows. They come across a book and an audio tape, and the Evil become powerful when the chants are read out loud. All the friend try to escape in fearbut the evil takes them one by one. But only one survives and fights until the the morning.

#7-The Sixth Sense: A successful child psychiatrist has to take on the challenge to helps a terrified little boy who struggles with the power to see dead people/spirits. But as him and the little boy get closer he learns some really disturbing things about the child’s visions.

#8- Saw 1: Two men wake up in a bathroom across from each other and come to the realization that they have been captured by the infamous killer Jigsaw. They have to escape before the time runs out and they will face some crazy consequences.

#9-Dawn of the Dead(1978): This bloody, intense, and scary movie is about an epidemic of zombies that have come back from the dead while, Two swat team members from Philadelphia, a traffic reporter, and his girlfriend look for shelter to hide from the zombies in a huge shopping mall.

#10-Friday the 13th(1980): A group of Camp Counselors are stalked and murders as they are trying to open Camp Crystal Lake where years before, Jason Vorhees drowned as a little kid, and a gruesome double murder.